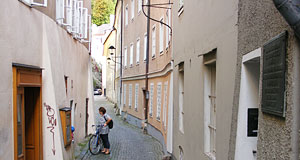 Squeezed into the little space between a major road and the Kapuzinerberg Mountain, branching of Linzergasse but almost hidden and still very prominent, you will find the Steingasse Lane, a small medieval alley that maintained a charming, medieval atmosphere.

For centuries, the Steingasse was a major North-South connection, beyond the Salzach River probably the most important traffic route in this direction. A lot of the salt produced in the saltmines of Salzburg in Hallein was transported through the Steingasse.  Today it is considered to be the "little sister" of the Getreidegasse on the other side of the Salzach River.

The area that is the Imbergstraße today was pretty much wilderness for centuries, since the river Salzach flooded it frequently. That, in return, granted the houses of the Steingasse direct access to the river and space for extensive gardens. This state was maintained until 1862, when the river was eventually embraced by walls to prevent floods.

For that reason, many craftspeople relying on the supply of water occupied houses in the Steingasse - butchers, potters, dyers. The unique character that the alley gained through its working class residents can still be estimated by today′s visitors.

To protect this main route into the city and thereby, to secure Salzburg itself, two gates were built: the outer or "Äußere Steintor" Gate that is not preserved and the inner or "Inneres Steintor" Gate, which was built in 1280, extended during the 30-years-war in 1634 and considered to be the oldest gate of Salzburg. It is still preserved and can be seen near the southern onset of the Steingasse.

The need for this fortification was demonstrated in 1525, when during the Bauernkriege rioting hordes of farmers and miners streamed into the city of Salzburg to attack Prince Archbishop Matthäus Lang and his troops.

Beyond its economic and strategic significance, the Steingasse is also known for being the birthplace of Joseph Mohr. Entering the alley from its northern end, you will come to the Imbergstiege staircase on your left-hand side - it leads to the Kapuzinerkloster and the Johanniskirche. Joseph Mohr was born to labourers in house number 31 on December the 11th in 1792.

Later he became teacher and famous as the poet responsible for the lyrics of "Silent Night". There is a small privately run museum in the birthplace, but if you are interested in Silent Night, you should consider to go to Oberndorf where the carol was written and performed the first time in 1919.

Following the alley, you will pass the inner Steingasse Gate and a number of charming bars, the art cinema DAS Kino, bookshops and other stores. Once you passed the gate, look at the next couple of houses: they are an attraction of their own rights to many visitors from country with a more restrictive legislation than Austria: here you will find some of Salzburg′s brothels, and if you haven′t seen any before, yes, they do have little red lanterns in front of their main entrance. Prostitution is legal in Austria and prostitutes in Salzburg have to do regular health-checks. The "Maison de Plaisir" is said to be a brothel since the time of Mozart.

At the southern end of the Steingasse, you will come to a square that was previously occupied by the outer Steingasse gate. Now it is, much less dramatic, a parking lot. Look on your left-handside and you will find a marble fountain by the Kapuzinerberg stone wall; it is called "Engelwirtsbrunnen" and dates back to 1660. Originally, it was in front of a pub in the Steingasse, but transferred to its current site in 1890.

http://www2.salzburg.info/sehenswertes_166.htm
History of the Steingasse - opens in new window