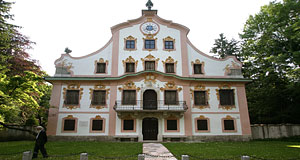 The Robinighof is one of those attractions that even many locals don′t know, though it is well worth a closer look - especially for those with a particular interest in late Baroque architecture: The Robinighof is an unusual and exceptionally well-preserved late-Baroque or Rococo villa / chateaux in the district of Schallmoos.

This district of Salzburg is rather known for its commercial touch, new shopping malls, major roads and railways - so not the typical kind of environment for any buildings of touristy interest. However, the Robinighof can be found in an alley set aside from the major ugliness of Schallmoos.

The name "moos" refers to a swamp or wetland. In this case, the wetlands were drained under the rule of Prince Archbishop Paris Lodron in the 17th century. Soon after the land had become arable and usable, a manor was first mentioned in a written record of 1648. The Robinighof then belonged to the Domkapitel, the cathedral′s chapter. In 1744, the manor was sold to a local man called Joseph Robinig, who gave his name to the building.

Current State of the Robinighof

The original manor was re-modelled into its current late-Baroque shape in 1750. The architect in charge was called Franz Anton Danreiter and he did a particularly good job with the front façade, which has very delicate ornaments and decorations. The trees that you can see in the surroundings of the Robinighof are among the oldest of Salzburg (one even pre-dates the trees of the Hellbrunnerallee) and remains of the once extensive parks.

Looking at the entrance of the Robinighof, you will see the coat of arms of the house of Robinig-Ainser. The children of the Robinig family were close friends of Wolfgang Amadeus Mozart, who spent a lot of time at the Robinighof. In 1785, the iron merchant Georg Josef Robinig hired a painter to add Classicist frescos. Otherwise, the Rococo character of the building is predominant and all nice and shiny again since a recent and extensive renovation of the Robinighof took place in 2007.

Around the corner, at the end of the park-remains, you will find the Romanian-Orthodox church with a community centre. The Robinighof is private property and not open to the public. However, the façade alone justifies a brief visit in case you should happen to be in the area.

http://de.wikipedia.org/wiki/Rokoko
Wikipedia on the Rococo Age