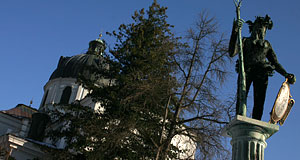 The Old Botanical Gardens were located at the site of today′s Furtwänglerpark in the central courtyard of the old University Campus. This campus was a cluster of buildings (Alte Universität) that was mainly built in the first half of the 17th century. The gardens existed from 1623 to 1820, they therefore outlived the first university.

Note that the Napoleonic Wars led to the secularisation of Salzburg and the "downgrading" of the university to a so-called Lyzeum, sort of a liberal arts college. It was re-founded as a full university only in the 1960ies (note also our article on the modern University of Salzburg). From 1780 to 1820, the Botanical Gardens were run as a private herbal garden with a commercial objective.

In 1623, the gardens were designed for the university as a recreational and educational facility. Herbal gardens also served a medical purpose. The arboretum, the tree section, was decreased in size when the Collegiate Church (Kollegienkirche) was built as the official university church between 1694 and 1701.

The architect in charge was Johann Bernhard Fischer von Erlach; his plans incorporated the remaining arboretum and the rest of the Botanical Gardens into the university ensemble. In 1780, Franz Anton Ranfftl became the manager of the facility; he was the one that operated the Botanical Gardens commercially until 1820. Until that year, the garden was known as "Kollegiengarten" (Collegiate Garden).

After 1820, the garden was re-named into Botanischer Garten (as you might have guessed: "Botanical Garden") and served mainly as an educational facility for the medical school of the Lyzeum. It was opened to the general public as a park in 1941. In 1954, the park was officially re-named "Wilhelm-Furtwängler-Park" in honour of the famous conductor for his merits concerning his work at the Salzburg Festival.

Recent Additions to the Wilhelm-Furtwängler-Park

In 2006, the Große Aula (congregation hall of the university), the library and the park were modernised extensively. Great controversy and public debates broke out, centred around the Kiefer Pavilion, the house for Anselm Kiefer′s monumental A.E.I.O.U. artwork (the first project of this kind that was endowed by the Salzburg Foundation).

In the end, the new construction visually links the park with the Haus für Mozart and the new additions to the library/Aula wing since 2008. The design is considerate with respect to Fischer von Erlach′s original Baroque intentions, yet modern and coherent. It is difficult not to like it, especially if you remember the way the park looked back in the 1990ies. The only thing several people have pointed out is that most of the trees that were once a substantial part of the Botanical Gardens were cut down, finally transforming the piece of green from a garden into a park.

http://www.stadt-salzburg.at/
City of Salzburg on the Furtwangler Park