Steintheater Hellbrunn: A Theatre made of Stone 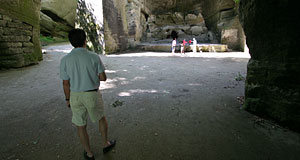 Many - if not most - visitors of Salzburg make it to the early-Baroque leisure palace of Hellbrunn Castle in the south of Salzburg. There they usually concentrate on the palace itself, its famous trick fountains and the beautiful gardens surrounding it. The white pavilion that featured in "The Sound of Music" is another key-attraction of Hellbrunn, but can be found right at the entrance of the garden. If you don′t make it any further, it is a pity, since Hellbrunn has some surprises to offer.

Keep on walking across the park to get to the Monatsschlössl. This little chateaux houses a museum of folk culture and is operated as a branch of the Salzburg Museum. From there, you can either enjoy a great view over the southern parts of the city; or you keep on waking into the same direction until you get to the Steintheater or Stone Theatre. This article is mainly about the Steintheater. It was built "indirectly" through the quarry that was created for the construction of Schloss Hellbrunn.

Opera at the Hellbrunn Steintheater

The quarry was there to mine building material, the so-called Salzburger Konglomerat stone that is very common all over the city and its surroundings. When the construction was completed, the quarry was abandoned for a while, but re-opened as a theatre.

The early Baroque (or Manierist) Age was very fond of nature and outdoor celebrations, so the outdoor theatre makes perfect sense. Note also the Heckentheater or hedge theatre at the Mirabell Gardens. The stone theatre or Steintheater was equipped with a stage and enough space to seat a decent audience under the rule of Prince Archbishop Markus Sittikus. In 1617, the opera "Orfeo" by Claudio Monteverdi was performed here - the first opera performance outside of Italy.

Today, the Steintheater is sometimes used for concerts during the summer. Beyond that, it is en-route to walk back to the parks of Hellbrunn and ultimately to the castle itself. As a non-official piece of information: The Steintheater is a popular late-night venue for moderately legal "Goa Parties" and other dance events among Salzburg′s youth. Nearby is the Tiergarten Hellbrunn, the zoo of Salzburg.