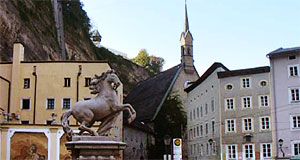 On the "Bürgerspitalsplatz" (meaning "citizen′s hospital square") at the end (or beginning, depending on where you start) of the busy and posh Getreidegasse, you find the Curch of St. Blasius, formally called "Bürgerspitalskirche". Around the corner you will find the "Haus der Natur" natural history museum, the Bürgerspital itself and the Markuskirche.

A very long time ago, in the 12th century, there was a little chapel for St. Blasius on this site, which were meadows owned by the rich Abbey of Admont. 150 years later, Prince Archbishop Friedrich III. purchased the meadows to build a hospital for the citizens of Salzburg.

This hospital was supplemented with a chapel - eventually Salzburg was a non-secular, Catholic state by then. This chapel was plain and hardly structured or decorated at all. A balcony in old-Romanesque style was built for the patients of the hospital.

A quiet spot before entering Getreidegasse

The interiors of the church/chapel are divided into three naves with vaulted ceilings and octagonal pillars. The main altar is in classicist style with marble extensions and a crucifix group.

The façade of the St. Blasius Church has a crucifix group facing the Getreidegasse from 1866. Altogether, this church is a bit of a mix of styles and anything but a prime attraction of Salzburg. However, it definitely has it′s own flavour and so do stop by if it is on your way or if you want to escape the crowds on the Getreidegasse for some quite minutes in one of the rather neglected churches of Salzburg. Sometimes St. Blasius Church also serves as a venue for concerts.

Click here to find the St. Blasius Church on our Salzburg Map

http://www.classictic.com/venues/26.html
Information on the church and concerts - opens in new window