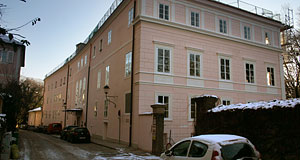 The Arenberg Villa is situated in the Arenbergstraße 8 to 10, an extension of the Steingasse, and was originally built in the 14th century under the name Schloss Bürgelstein. It is not to be confused with Chateaux Arenberg in France, a much fancier palace than the one in Salzburg.

Prince Archbishop Johann Ernst von Thun bought it in the 17th century, but it was sold again in 1791 to a landscape gardner called Sebastian Rosenegger. He built the extensive gardens; his son was an archaeologist who found Roman ruins in the park of the palace. After a fire in 1814, the villa was re-built in late Biedermeier style. In 1816, the villa was bought by Princess Sophie of Arenberg and modernised. Since then, the chateaux is known as Schloss Arenberg in Salzburg.

After the Arenberg family had sold the property, it served as a residence to a variety of noteworthy Salzburg burghers: Arenberg Villa was the living house of the poet Hermann Bahr and later the headquarter of the Max-Reinhardt-Research- and Memorialfoundation. In 1931, the province of Salzburg bought Schloss Arenberg. Later, it was sold to the city of Salzburg and then to a bank.

Recent Past of Schloss Arenberg

In 2001, Schloss Arenberg was sold to the non-profit organisation "Austrian American Foundation", who used the building as something between a conference hotel and forum for scientists and artists.

In 2009, a fire in the attic of Schloss Arenberg caused considerable damage to the building and caused severe financial losses to the foundation. It was renovated (again) until 2010 with considerable efforts.

Schloss Arenberg contains a noteworthy wooden ceiling from Schloss Tandalier from the 16th century. It is the temporary home for the Vienna Philharmonic Orchestra during the Salzburg Festival. Note the nearby Schloss Blumenstein and Schloss Elsenheim.

http://www.aaf-online.org/arenberg.htm
"Official" Website (as official as it gets with a non-public building) - opens in new window

http://www.salzburg.gv.at/themen/ks/kultur/burgen/arenberg.htm
Information by the City of Salzberg - opens in new window