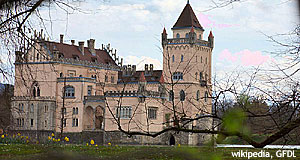 The community of Anif is South of Salzburg, not far from Hellbrunn Castle and was home to the conductor Herbert von Karajan. Here you can find the "Wasserschloß" ("water castle") Anif. The castle was once the seat of the bishops of Chiemsee, but a plain court until the 19th century, when it was re-modelled between 1838 and 1848 in neo-Gothic style. It is private property of the family Johannes Moy and not accessible for the public.

Don′t worry too much: the only claim to fame of Schloß Anif is the fact that it was used as a film site for "The Sound of Music". Beyond that, it′s just another piece of neo-Gothic tastelessness as so many others all over Europe and North America. The original building of Schloß Anif originated in the 16th century.

Anif is probably more worth a visit - however, in case that you are in the area, we would recommend you to spend your time walking along Hellbrunnerallee, which is a lot more pleasant.

Guide to the "Sound of Music" locations