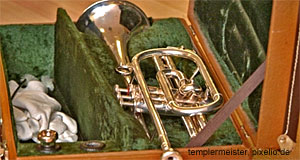 Michael? Wasn′t it Joseph Haydn? Correct, the famous father of the Viennese Classic School went by the name of Joseph. Relatively few people know about his brother Michael Haydn, who was also a composer and spent most of his career in Salzburg. There is a small museum dedicated to Michael Haydn, situated in the Abbey of St. Peter. It shows some 160 items that illustrate the life and work of Haydn′s "little brother".

Visitors should note the interesting differences in the biographies of Haydn and Wolfgang Amadeus Mozart: Whilst Haydn was effectively a foreigner, Mozart as a local failed to achieve the successes that Haydn produced. Haydn ended up in a comfortable position at the court of the Prince Archbishop, whereas Mozart frustratedly moved to Vienna.

The Haydn Museum is small and clearly not the most popular museum in Salzburg, but well worth a visit. It will show you aspects of Baroque and Classical music that you will not learn about in the mainstream Mozartmania that Salzburg celebrates for some 200 years now. The 37 masses, 43 symphonies, 19 operas and other major works by Michael Haydn provide an impressive portfolio from which visitors of the Haydn Museum can listen into samples. This makes the museum a friendly and quite interactive place. Note that the tomb of Michael Haydn can be seen in the Stiftskirche, the church of St. Peter.

The Haydn Museum has limited opening hours; from July to September, it is open in the afternoons and after the "5-o-clock Concerts" (see our article on concerts in Salzburg for further details). In early summer and autumn are even more limited and the museum closes off-season. The best news at last: The entrance fee is low (2 Euros as of 2009); but don′t plan to spend too much time there, it really isn′t a very big museum.