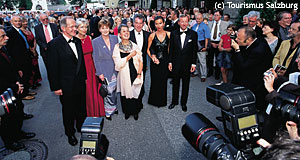 Festivals have always been a big deal in Salzburg - from the Middle Ages with their "Mysterienspiele" or "mystery games" to costume balls and parties in Baroque times. Prince Archbishop Hieronymus Colloredo ended this tradition by banning a number of big festivals in Salzburg - no more Salzburger Festspiele, but for a few years only.

After the secularisation of Salzburg, the political and economic power of what was now a province of Austria was broken. The city of Salzburg only slowly recovered from the Napoleonic wars and the plundering that had taken place. Over the course of the 19th century, however, tourism gradually developed and the financial confidence of Salzburg recovered. There was an economic need for a big festival in Salzburg - just like the Salzburg Festival.

With the rise of Romanticism, people started to remember the festival and theatre traditions of Salzburg. At the same time, Mozart turned into a best-selling product for the young, but hopeful tourism industry in Salzburg and so Mozart festivals and concert series took place.

Promotional Video on the Salzburg Festival.

At the 100th anniversary of "Don Giovanni" in 1887, the conductor Hans Richter told Salzburg off for failing in maintaining the tradition of music. He introduced the idea of having an annual festival - "Salzburger Festspiele" - in honour of Mozart and classic music. However, this idea did not materialise until Hugo von Hoffmannthal and Max Reinhard took it on and drafted their idea of a festival in 1919.

They wanted "opera and drama, and of both the best!" in the spirit of Mozart - or how they understood the spirit of Mozart to be, namely pure, enjoyable and beautiful. On the 22nd of August 1920, the "Jedermann" was played on the Domplatz for the first time. In 1922, a fundraising campaign was started to formalise the Salzburg Festival or Salzburger Festspiele and build a festival hall in Hellbrunn, but due to the high inflation of those days and the generally difficult economic situation, this first attempt failed.

Salzburg becomes "stage of the world"

Nevertheless, the Salzburger Festspiele festival directors succeeded in getting the Wiener Staatsoper, the National Opera in Vienna, to perform in Salzburg and quickly some of the world′s most famous artists recognised Salzburg as a central point for high-quality music and drama. Conductors such as Wilhelm Furtwängler, Arturo Toscanini or Karl Boehm stayed and performed in Salzburg.

Only when the Salzburg Festival had become internationally recognised, the World economic crisis struck it severely. From 1931 onwards, every German travelling to a foreign country had to pay a high fee of 100 Mark, a little fortune in those days. However, after Hitler had risen to power, he intended to finally destroy Austria′s tourism industry - and the Salzburg Festival - by enforcing a fee of 1000 Mark for every trip a German wanted to do to Austria.

To survive this difficult situation, the city and federal province of Salzburg gave a lot of money to the Salzburger Festspiele festival. However, after Austria was incorporated to the Third Reich, the fame of the Salzburg Festival faded. This was partly due to many artists had to leave the country for being Jewish or politically opposed to the Nazis, but partly also due to Hitler′s preference to Wagner and the Bayreuth Festival.

Revival of the music festival after WWII

The festival was never interrupted, not even during the war - a few weeks after the end of the war, the Salzburg Festival 1945 started with support of the US troops, responsible for Salzburg province.

In 1946, the Festival hired Oscar Fritz Schuh as a directory, who became a legendary figure of the Salzburg Festival after working on 30 productions until 1970. He strongly emphasised the importance of contemporary plays and operas such as Gottfried von Einem′s "Danton′s Death".

In 1956, the local Herbert von Karajan took on the position as the art director of the Salzburg Festival. A world-famous conductor himself, he proved to be controversial but immensely popular and kept his office at the Salzburger Festspiele until he died in 1989.

Recent changes: Away from the "Mozart Festival"

For the opening of the Great Festival Hall in 1956, he resisted the desires of the Mozart mafia and insisted on performing Richard Strauss′ "Der Rosenkavalier". A great deed in a city that pimps out Mozart on every occasion.

Karajan also shifted the focus of the Salzburger Festspiele festival from drama to music and opera, where it remains until today, still featuring the Wiener Philharmonika. Following the death of Herbert von Karajan, the Belgian Gerard Mortier took the office as the art director of the Festspiele.

He opened the Salzburg Festival for students and got rid of a lot of the "antiquary" smell of the Festival. Popular with employees most artists, he failed to win the support of the Mozart Mafia - the "establishment" in the audience - and left Salzburg a few years ago. The current art director is Peter Ruzicka.

Jedermann - a play that shaped the Salzburg Festival

The most classic play of the Salzburg Festival is the "Jedermann" ("every man"), which is played on the Domplatz in front of the cathedral to incorporate the façade of the Salzburger Dom into the play.

Playing the "Jedermann" in Salzburg is considered to be one of the most prestigious stage roles an actor can get in the German speaking World. The play itself was written by Hugo von Hoffmannsthal between 1903 and 1911 and it is based on similar "moral plays" from the 16th century.

Drama at the Salzburg music festival

The first director of the Jedermann was Max Reinhardt, the other co-founder of the Salzburg Festival. The play tells the story of the rich patrician Jedermann ("every man"), who doesn′t respect god, but worships his possessions and his wealth.

Much of the play is based on dialogues between allegoric figures - such as riches, death, faith or the evil represented by the devil. The Jedermann was often criticised for being of dubious literary quality, but whatever one might think about its metrics and dialogues, the play is a great success of the Salzburg Festival for some 85 years now. The splendid façade of the Salzburger Dom and the elaborate and colourful costumes give you an idea on how magnificent festivals in Baroque times were.

Wikipedia on the Salzburg Festival