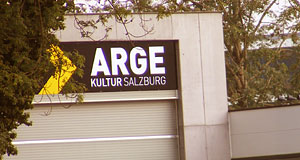 The 1980ies were a time full of hope; TV was still decent, Austria fiercely defended its neutral position between the frontiers of the Cold War and industries gave a clear enemy to all the environmentalist-pacifict-not-quite-68-anymore left-over hippies. It was a good time.

At its peak, the tension between environmentalist issues and economic pressures became a problem in particular for Austria′s social democrats, and eventually citizen activist groups formed that later developed into the Green Party. That much about the times - but now for the traces they left in Salzburg.

Beyond somewhat romantic ideas that swirl around some parishes′ offices and church communities, there is the "Zukunftsbibliothek", the "future library". This is a think tank founded by the Nobel laureate Robert Jungk in 1986. In the same year, Austria′s Green Party gains seats in the National Parliament, one of the delegates was the Salzburg activist Herbert Fux.

For an arty night out in Salzburg

Most importantly, there is the "Kulturgelände Nonntal" or "ARGE" Nonntal, recently re-named as ARGE Kultur, which was a charming blend of a bistro, backyard-stage and relict from this decade of hope and progress. In 2005, the ARGE Kultur moved from its provisorial (well, 20 years old) containers into a modern building.  Anything but a historic institution, the ARGE still runs one of the best snack bars of Salzburg and a tight program of concerts, discussions and reviews.

The ARGE is based on an initiative of 60 groups and societies called "ARGE Rainberg" that organised demonstration against the Salzburg Festival. A small stage, a bar and bistro area are extended into the garden during the summer months. That was the home of the ARGE since 1986, until it moved into the new building just around the corner.

Salzburg University′s departments for modern languages and some other humanities subjects are right next to the ARGE Kultur, adding to the arty, often international atmosphere of the Kulturgelände Nonntal. The ARGE Kultur Salzburg is still another indication of real life beyond Mozart kitsch in Salzburg. For a slightly alternative evening in the ARGE, check the programs published in daily papers or ask at the tourist information centre for a schedule.