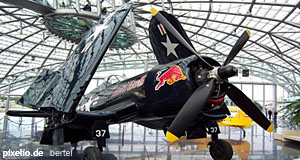 The Hangar-7 at Salzburg Airport is by no means a normal hangar; it is one of Salzburg′s contemporary top-attractions, a private airport hangar owned by the founder of the energy drink company "Red Bull", Dietrich Mateschitz.

Hangar-7 was built for hosting the private aeroplane collection of the billionaire Mateschitz, consisting of a growing number of small, not so small and some large historic and contemporary planes, helicopters and several vehicles such as Red Bull racing cars.

A formerly used hangar did not provide sufficient space for the collection, and so the Austrian architect Volkmar Burgstaller started planning a new building for Red Bull in 1999.

The construction of Hangar-7, essentially a massive glass dome, started in 2001 and in the summer of 2003, the building was opened in the international sphere of the Salzburg Festival and the presence of many celebrities.

If you visit Hangar-7, you might notice the playful arrangement of the lines that form the main domes. Every piece of glass was individually custom made in China and no one is exactly the same shape as any other in the dome. In total, there are 1 754 pieces of glass with a total weight of 380 tons. Hangar-7 is 14,5 metres high at its top, the steel frames holding the glass weigh 1 200 tons. Any doubts left that Red Bull truly does give you wings?

Of particular interest for tourists is the fact that Hangar-7 can be visited free of charge. It often hosts art exhibitions (although they normally follow the personal taste of Mateschitz, so don′t expect too much beyond martial machismo art), concerts, and, of course, the Red Bull aeroplane fleet.

Some Red Bull formula-1 racing cars supplement the exhibition and there are a posh restaurant called "Ikarus", run by celebrity-cook Eckhart Witzigmann and two bars that offer exclusive drinks and snacks.

Hangar-7 is just next to the Salzburg Airport, so if you go to Salzburg by plane, look out for it whilst you are landing or taking off. From the city centre the hangar is easily accessible by the city bus and even two hours of waiting time at the airport might give you an opportunity to walk over and have a look around.