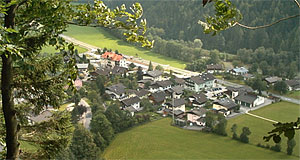 Weißbach is a village in the Pinzgau area in Salzburg, more specifically in the Saalachtal just outside of Lofer - as appropriately indicated by the full name. Weißbach has a population of approximately 400 and is surrounded by the outskirts of three major mountain ranges: The Loferer Steinberge, the Leoganger Steinberge and the Steinernes Meer. The village centre of Weißbach is situated at an altitude of 666 metres - the highest spot of the community is the summit of Mount Birnhorn at an altitude of 2,634 metres.

The 400-odd residents of Weißbach make the village the smallest community of the Pinzgau in terms of population. The tiny village makes a reasonably good base for off-the-beaten-track hiking or skiing, depending on the season. Both scenic areas and attractive skiing regions can be accessed rather easily from Weißbach by car, less so by public means of transport. Tourists generally come to Weißbach for hiking.

Hiking the Almen of Weißbach

Attractive hiking destinations around Weißbach that are worth noting include several Almen. An "Alm" was a special kind of mountain cabin that was used only during the summer months in order to utilise high pastures for livestock breeding. This kind of labour intense agriculture wouldn′t be lucrative today anymore, so most Almen are run as inns that serve drinks and a limited range of meals. Nice Almen of Weißbach are the Kallbrunnalm, the Kammerlingalm and the Litzlalm.

Note the Seisenbergklamm gorge, the power plant reservoir of Dießbachstausee and the mountain pass of Pass Hirschbichl are attractive hiking destinations in the surroundings of Weißbach. Lofer offers some shopping places and other facilities that you won′t find in Weißbach itself.