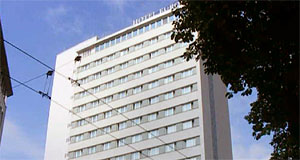 If you arrive in Salzburg by train, it is likely that the Hotel Europa building will be part of your very first impression of Salzburg. The main square in front of the Hauptbahnhof ("central station") is called "Südtirolerplatz" ("South Tyrol Square" and was extensively re-modelled over the course of several years around 2000.

The area around the station was - and to some degree still is - part of the less attractive side of Salzburg. The so-called "Elisabethvorstadt" district, named after Empress Elisabeth ("Sissi"), was developed after the destruction of the 16th century fortifications that occupied most of the area down to Mirabell Castle until the late 19th century.

Due to heavy bombardments of the station, most of the surrounding buildings in the Elisabethvorstadt were damaged or destroyed. This left the area for more modern buildings - though the financial constraints of the immediate post-war years led to the construction of cheap and tacky concrete towers.

The Hotel Europa was an exception: it was built in 1957 and designed to accommodate Salzburg′s need to offer state-of-the-art hotels for its recovering tourism industries. The building was controversial from the beginning (as it wasn′t the most beautiful of all buildings in Salzburg), and in the late 1990ies there were even plans to destroy this fine (?) example of 1950ies architecture.

Instead, the Hotel Europa was refurbished and a glass-front was added, which made the building a lot nicer and helped to distract from the new and immensely tasteless Empress-Elisabeth-memorial in front of it. Who said that Salzburg is only about pimping out Mozart? Now we got Sissi, too…

Underneath the Südtirolerplatz is an underground station for the regional trains. The construction of the station cost a fortune; since the trains go above the ground after approximately 200 metres, a local journalist criticised the project as the "shortest subway in the world".

North of the Südtirolerplatz you will find one of Salzburg′s bigger shopping malls and multi-screen cinemas, the "Cineplexx City" which is very popular with local teenagers, alongside with a new shopping mall, the Forum II. The square between station and forum is used for a Christmas market between late November and the 24th of December.

It features foreign films in the original language, so take a look at the program in case you are interested in movies in English. The building was erected around 2000 and is a fine example of 90ies architecture and the re-discovery of concrete.

The entire area of the Südtirolerplatz has become a much brighter and cleaner place in the last ten years then it was before. However, it is still clearly recognisable as an immigrants′ area and a part of Salzburg that is rather cheap for living - and in turn neither the nicest, nor the safest part of Salzburg.