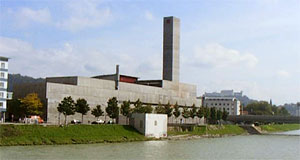 If you step back from Salzburg′s magnificent old town only a little bit until you get to the district of Mülln or the back of the Mirabell Gardens, and you won′t be able to avoid a rather recent addition to the skyline of Salzburg: A dark block of concrete with a massive chimney.

This is the Heizkraftwerk Mitte, a caloric power plant that was re-modelled between the late 1980ies and - with the recent concrete addition - 2002.

The concrete layer is 120 metres long and the chimney stretches over 70 metres towards the sky. The architects "Betrix and Consolascio" are responsible for this building and were supposed to receive an award for the project in 2002.

A piece of Salzburg beyond "The Sound of Music"...

By then, most people in Salzburg had finally realised that the building was no longer a construction site, but was supposed to stay as it was, making the architects the probably most hated people of the year. After wide-spread protests from the general public, the Federal State of Salzburg's government decided to to give the project the awards as a panel of independent experts had decided. This move didn't help too much to make peace with the public, but pissed off the experts.

You will have to appreciate modern architecture very much to like the new Heizkraftwerk. However, after all it′s there, it was expensive and with all that massive concrete, it would be really hard to get rid of it.

So have a look and accept it. At least it is a fine example of the sense for risk that Salzburg′s politicians seem to have.