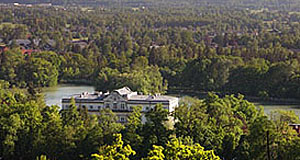 The Salzburg Seminar is a Non-Government Organisation (NGO) that aims to discuss social, political and academic topics of global relevance; in 2007, it was re-named into "Salzburg Global Seminar" to underline that its scope has widened since its foundation. The headquarter of the Salzburg Seminar is the Leopoldskron Castle.

The organisation was founded in 1947 by graduates of the University of Harvard: Clemens Heller, Richard Campbell and Scott Elledge. Since then, the Salzburg Seminar aims to bring global World leaders together in Salzburg to contribute through their discussions and lectures to the development of peace and intercultural understanding.

The seminar was often described as an "intellectual Marshall plan", although this is misleading since the aims of the Salzburg Seminar target no longer Central Europe as a main "market", but a much more international community than right after the end of World War II.

Leaders from all over the world in Salzburg

Members who lecture and discuss at the Salzburg Seminar are promising leaders, generally in their thirties. Since 1947, 25,000 fellows from 150 countries have contributed to the Salzburg Seminar, mostly decision makers from manifold disciplines including economy, science, cultural life, law and civil administration.

Today, there are alumni groups in more than 60 countries, with members who are often in leading positions in governments, corporations or academia. Former lecturers and fellows of the Salzburg Seminar include Warren Christopher, Leon Brittan, Garrett FitzGerald, Alois Mock, Vaclav Havel and Klaus Liebscher.

The Salzburg Seminar for lawyers

Among the values of the Salzburg Seminar of intellectual exchange among different people, LAWSS aims to deepen professional relationships among its members and alumni.

Today, you can stroll around the area of the Leopoldskroner Weiher lake and mingle with locals walking their dogs or watching birds. The Leopoldskron Castle itself is not open to the public, but only to participants of the Seminar′s programs as well as hotel guests.

Wikipedia on the Salzburg Global Seminar