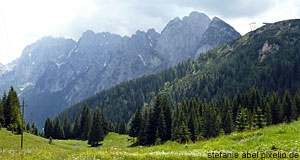 The Tennengebirge Massif is a mountain range that belongs to the Northern Calciferous Alps. It is a very characteristic piece of landscape with lots of cliffs and open rock, famous for its karst formations and caves. In fact, the Tennengebirge is one of the "cave richest" mountain ranges in the World.

The Tennengebirge is segregated from the mostly Bavarian Hagengebirge through the Pass Lueg, once battle ground in the Napoleonic Wars. The Tennengebirge can be accessed via a range of communities, all of which try to promote hiking tourism and various Alpine sports: Werfen, Pfarrwerfen, Golling and Werfenweng are the most important municipalities of the Tennengebirge.

Things to See & Do in the Tennengebirge

The Tennengebirge and the local communities have several tourist attractions to offer, some of which are of international significance. The most important is probably the Festung Hohenwerfen, a 16th century fortress; and the nearby Eisriesenwelt in Werfen, a 42 kilometre long ice cave of which parts are open to the general public. Many of the regional caves are not fully explored yet; there is a caving society in Salzburg that maps many kilometres of new "cave land" every year.

Hiking in the Tennengebirge Mountains

For those who prefer to hike above ground and enjoy both landscape and daylight, there is a dense network of hiking paths in the Tennengebirge. To point out only two, note the Arnoweg and the Via Alpina. The latter one is a national pathway with one section passing through the Tennengebirge, specifically between Lungötz and Werfen. Note that a lack of water is ironically met be frequent fogs in the Tennegebirge, which creates a certain degree of danger especially for inexperienced mountaineers. During the winter, ski tours are popular.