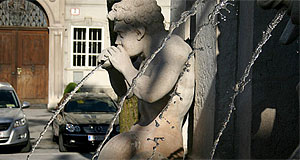 The Kapitelschwemme is a Baroque horse well at the Kapitelplatz Square in the Oldt Town of Salzburg, right next to the Salzburger Dom cathedral. It looks a bit like a mini-version of the Fontana di Trevi in Rome, which is probably the reason why many tourists throw coins into the shallow well.

The Kapitelschwemme was first built in the early 17th century and was once home of the Pegasus statue that you can now see in the Mirabell Gardens. The well got its current appearance in 1732, when Prince Archbishop Firmian had a new façade built for the pump house – including the playful Baroque Neptune and ornaments that you can also see in our photo collection.

Short Description of the Kapitelschwemme

Neptune holds a sea horse, a reference to both the function as a horse well and the Residenzbrunnen on the other side of the cathedral. The two Tritons that flank the Neptune and the horse are actually older than the rest of the artwork: They were made in 1690, originally for a different well. All artwork except for these two Tritons was made by the local mason Josef Anton Pfaffinger, based on designs by the more famous artist Franz Anton Danreiter.

Look at the plate above Neptune and you will find a vase, carried by angels, the coat of arms of Archbishop Leopold von Firmian (he of Schloss Leopoldskron and Klessheim) and the Latin inscription: "LeopoLDVs prInCeps Me eXtrVXIt" ("I was built by Prince Leopold"). There is a second meaning if you read the capitalised letters and Roman numerals: L+L+D+V+I+C+M+X+V+X+I equals 1732, the year in which the Kapitelschwemme was built.