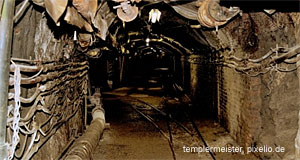 Leaving Salzburg and going to the South towards the mighty Tauern Mountains in the Alps, you will quickly come to the charming, medieval town of Hallein by the Salzach River. Here you will find the cash cow of the Prince Archbishops: the salt mines that gave the name and wealth to Salzburg.

Hallein itself is a pleasant place with an attractive town centre, some museums and a promenade along the river. The little Island ("Pernerinsel") holds an old storage hall that is now used for concerts, plays and during the summer for events of the Salzburg Festival. However, the greatest attraction of Hallein lies a bit higher on the nearby Dürrnberg Mountain.

The Salt Mines of Hallein are among the oldest mines in the World that are open to the public as show mines. Celtic tribes started to carve the salt from the mountain, a group of Illyrian settlers even built a town on the Dürrnberg with some wooden fortifications. Their wealth left a good record of archaeological findings of which most are on display in the Salzburger Museum (once called Carolino Augusteum), including the famous "Schnabelkanne".

If you are lucky, you might get an opportunity to chat with some archaeologists at work, since some sort of excavations are almost always going on. Entering the salt mines themselves is a bit pricey, but well worth the money. It starts with collecting the traditional miners costume - or at least that′s what they will try to make you believe. In fact it′s more some sort of white over-all dress that will keep you tidy and clean. Beyond that, you will look funny.

Then a guide - he will actually wear a proper traditional costume - takes the visitors on a little train into the Dürrnberg Mountain mines and will lead you trough different parts and layers it. The tour is well-prepared and supplemented with little info-spots, multi-media clips that tell the history of the salt mines and trade (might be a little tacky, but hey, it′s for tourists) and two up to 42 metre long wooden slopes.

Especially the latter ones are great attractions in particular for children - they even beat the boat "cruise" over an underground lake of brine and the scary mummy display of a preserved Celtic miner. The tour ends - most surprisingly - in the souvenir shop, but your ticket will include a museum over ground.

Dürrnberg: One of the oldest Salt Mines in Austria

This museum is relatively new and contains displays of Celtic life and other key events in the history of the mines. As with all parts of the Hallein Salt Mines, essentially all displays are multilingual and guides are used to a very international audience - that doesn′t necessarily mean that they wouldn′t have a funny Austrian accent, but they will be able to communicate with you beyond a discussion about the weather.

On the way back to Salzburg, you could stop by the Kaltenhausen Brewery. It is famous for the "Kaltenhausener Bernstein" ("Kaltenhausen amber"), an orange and somewhat girly beer that is served in special glasses.

On a general note: the Salt Mines of the Dürrnberg are among the top-attractions that Salzburg can offer - if not unique in all of Austria. We absolutely recommend you to go there if you can make it.

http://www.aeiou.at/aeiou.encyclop.s/s031454
AEIOU on the salt business in Austria - opens in new window