Art Project of the Salzburg Foundation 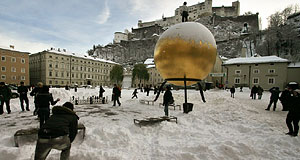 In 2002, a private consortium of art benefactors announced the intention to launch a rather unusual art project: One established and highly-regarded contemporary artist should be invited every year over a period of ten years to produce a large piece of art that would then be installed at a public place in Salzburg′s city centre.

The objective of the project was to build up a unique collection of sculptures that would grow from year to year – only to be presented at a central, final place after the 10 years are over and the collection is complete. The artists would be selected and invited by an independent and international panel of art experts. Almost all of them have caused a regional (provincial?) scandal and fierce resistance among Salzburg′s population.

This annual scandal arising over each year's project has become a ritual and is good fun to observe. The debate usually concentrated on two aspects: Why the artwork in doubt was supposed to be shit; and secondly, why the its location was not suitable for any piece of modern art in general and the one in doubt in particular.

All artwork is commissioned and made specifically for this project. In the following paragraphs, we would like to introduce the sculptures that were made so far. Note also our articles on art and culture in Salzburg.

Anselm Kiefer′s A.E.I.O.U. made the start in 2002. A cubic house was made specifically for the work and erected in the Furtwängler Park, just between Kollegienkirche and Festival Halls.

Mario Merz′ "Numbers in the Forest" ("Ziffern im Wald") was the artwork of 2003. It was built right behind the Museum der Moderne on the Mönchsberg.

Marina Abramovic′s "Spirit of Mozart" was the artwork of 2004. It was installed at the Staatsbrücke, the main bridge in the Altstadt. It can be found on the side where the Linzergasse ends.

Markus Lüpertz′ "Mozart a Hommage" was the artwork of 2005 and is a reasonably original piece of art that was installed on the square between the Markuskirche and the Gstättentor.

James Turrell′s "Sky-Space" was the artwork of 2006 and built right next to the Museum of Modern Art.

Stephan Balkenhol′s "Sphaera" and "Frau im Fels" ("Woman in the Rock") was made in 2007; it is a twin-sculpture and comprises of a man on a golden sphere on the Kapitelplatz next to the Salzburger Dom cathedral and a woman in the cliff next to the Felsenreitschule, at the Toscaninihof. Balkenhol secured himself of the most prominent location of the project so far.

Anthony Cragg′s "Caldera" was installed in 2008. The sculpture, which can be entered, was built at the Markatplatz, right in front of the Dreifaltigkeitskirche.

Christian Boltanski′s "Vanitas" was the project of 2009. It is divided into a plastic and an acoustic part and installed in the Romanesque crypt of the Salzburger Dom cathedral.