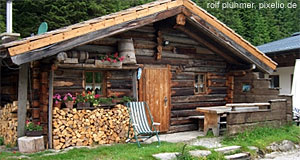 The Salzburger Sonnenterrasse is an official travel destination in the state of Salzburg, more specifically in the centre of the Pongau region. The Salzburger Sonnenterrasse comprises of two communities, Schwarzach and St. Veit, that formed this destination to have a marketing platform. There are a few characteristics to keep in mind when talking about this area: Schwarzach and St. Veit take great pride in the fact that they are among the sunniest locations in Austria, thus the name ("Sonnenterrasse" means "sun terrace").

They are both located at the base of the Salzach River Valley, the main line through the state; both of them have a rather industrial or commercial tradition and a lot of railway and cargo traffic goes through the valley - which makes the Sonnenterrasse region very accessible. Both towns are in the middle of a very touristy region; but due to the commercial tradition, this is less pronounced in the Salzburger Sonnenterrasse itself and the two towns have a hard time competing with their neighbouring travel destinations. Most of the surrounding skiing areas are members of the Ski Amade association, one of Europe′s biggest skiing regions.

Free-Rider Advantage for the Salzburger Sonnenterrasse

Schwarzach and St. Veit try to sell what they got: Good links to the surrounding slopes, some facilities for skiing and other winter sports on their own and a reputation for good air (Schwarzach was a spa town because of the good air) and sunshine. All the "usual suspect" activities of a vacation in Austria are being offered: Horseback riding throughout the year, cross-country skiing, snow hiking, tobogganing during the winter; hiking, mountain biking, paragliding and other sports during the summer season.