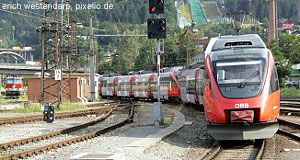 Most international visitors of Kitzbühel come during the winter season for skiing; the Tyrolean village is one of the most exclusive skiing areas in Austria and famous in much of Europe - if not beyond. There are three major airports that are convenient for stays in Kitzbühel: Salzburg, Munich and Innsbruck. In Salzburg, there are always independently travelling international tourists that come to the city during the skiing season for the usual sightseeing.

They often want to go use Salzburg as a base for spending two or three days in Kitzbühel and the a few days in the city. Both types of holidays require transportation between Salzburg and Kitzbühel. In this article, we have tried to present information on public transport and convenient ways of getting from Salzburg to Kitzbühel - or the other way round.

The distance between Salzburg and Kitzbühel is a mere 80-ish kilometres, but you have to get around several rather big mountains. This means that you have to face a trade-off between speed and price - busses and trains are cheap, but slow; taxis are fast, but expensive. An exception is the Salzburg Snow Shuttle (see below).

1.) From Salzburg to Kitzbühel by Train

There are several convenient trains that link Salzburg with Kitzbühel a day. If you are under 26 and plan to travel to other places in Europe, an Interrail ticket might be the best option for you. Otherwise, train fares in Austria tend to be hefty. This is particularly true for Kitzbühel, because it is a mountain village and many train links take impressive detours. This leads to train journeys of approximately 160 (direct link) to 230 (one change) kilometres. If you travel on roads, the distance would be a mere 84 kilometres.

Direct trains take about 2 hours and 14 minutes, trains with a change approximately 15 minutes longer (in that time, you could get from Salzburg to Vienna). Changes usually occur in Wörgl or Bischofshofen. The train fare for the journey from Salzburg to Kitzbühel is approximately 25 Euros for one way, unless you have a discount card or eligibility to other discounts. Sometimes there are also special offers during the skiing season, which you would find out about by enquiring at the booking service at Salzburg station.

2.) From Salzburg to Kitzbühel by Bus

There are scheduled busses that connect Salzburg and Kitzbühel which are operated by the once public/national bus service "ÖBB/Postbus". These busses go via Lofer, where you have to change, and further on to St. Johann in Tirol and finally Kitzbühel. Since busses have the unpleasant habit of stopping in every single village, this journey takes about 2 hours and 45 minutes; there are airport shuttle links between Salzburg and Kitzbühel served by the same company for approximately 14 Euros.

A more efficient and affordable option is the "Salzburg Snow Shuttle", a bus service specifically for skiing areas. This shuttle bus departs from the city and goes straight to one of the fancy skiing resorts, but only one at a day. Kitzbühel is on the list for Thursdays. This link is perfect for people who use Salzburg as a base for a vacation with a sightseeing focus and want to add a few days of skiing. The bus will deliver you directly to the ski lifts of Kitzbühel and the journey takes "only" 1 hour 20 minutes.

The costs for the Snow Shuttle are 13 Euros for a round trip (prices given above for trains were one way, keep that in mind for comparing them). The snow shuttle usually operates from just before Christmas to early March. Detailed information can be obtained from any tourist information office in Salzburg or Kitzbühel.

3.) Flights from Salzburg to Kitzbühel

As stated above, there is no airport in Kitzbühel but the three international airports of Salzburg, Munich and Innsbruck offer convenient links to the city.

Several major car rental companies operate offices in Salzburg. You will find plenty of information in our article on renting a car in Salzburg; most of these companies can be found at or around the airport and near the station. Several taxi companies in Salzburg will offer transfers from the airport or any other point in Salzburg to Kitzbühel. Enquire costs in advance! For this article, we have done a quick search and called a few companies, and the rates tend to vary a great deal if sold as a package.

Normal taxi fares are regulated anyway and depend on the taximeter, they will be between 120 and 150 Euros for one way. With skis and holiday luggage, you might not be able to squeeze four people into one taxi. Note that there are taxi companies in Salzburg, Kitzbühel and various places in between, not all of them make offers at the same rates.

We have found a shuttle taxi that does mini-van transports from Salzburg Airport to Kitzbühel for 30 Euros per person one way. This is only marginally more than the train ticket and saves you a lot of time. For getting a deal like this (which we would consider a good one), you might have to book in advance. This specific company was located in Kitzbühel, but there are others that you can send enquiries to.