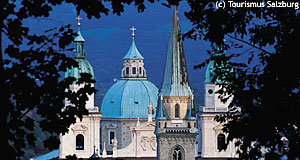 Salzburg is nice all around the year - yet every month has its specific attractions. In these "Salzburg around the year" articles, we try to highlight the most important reasons to come to Salzburg in this specific month. August is the month of the Salzburg Festival.

Weather in Salzburg in August

Salzburg in August: Forget about the weather! It will be magical anyway with the Salzburg Festival in full bloom and the city packed with tourists, mingled with the rich and beautiful of the World. The weather dates and figures for August are almost identical with the ones for the previous month: Daily maximum average of 23 degrees Celsius, minimum at 13 degrees and six hours of daily sunshine, supplemented with 15 days with rainfall. Expect several days with over 30 degrees, bring summerly clothing and a rain jacket. In the mountains or evenings, you will probably need a pullover.

Things to see & do in Salzburg: August

August is the big month of the Salzburg Festival, which starts in late July and lasts for six weeks. Salzburg is transformed into a stage for the World. But if you think that this is all just about opera, concert and theatre - you are wrong. Since Salzburg in August attracts thousands of filthy rich people, there are all sorts of spin-off events. Golf tournaments, galleries from Vienna that organise special shows in Salzburg, public performances of anti-Festival artists, street fests in the city centre.

Another significant event is the "Fest in Hellbrunn", a series of concerts held in the early-Baroque palace of Hellbrunn in the first two weeks of August ever since 1970. The tourist season climaxes and commercial concerts are held pretty much everywhere in Salzburg for the vast crowds of visitors - be careful, though, as they vary in quality.

Things to do & see in the surroundings: August

The "International Jazzfestival Saalfelden" attracts Jazz aficionados from all over Europe. High-key artists perform in the small town of Saalfelden in the mountainous south of Salzburg, even though it is only a small rest of what used to be a huge festival prior to 2004. It lasts for three days and takes place in late August.

Further north, in Hallein (where the famous salt mines are), you can attend a folk music festival: The "International Folk Festival Hallein" has a focus on European folk music. August is also the month of the lakeside lido festivals in many communities. Generally, August is the big holiday and festival month and it is worth double-checking with the tourist information centre what sorts of events there are at the time of your visit.