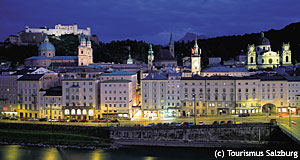 Salzburg is nice all around the year - yet every month has its specific attractions. In these "Salzburg around the year" articles, we try to highlight the most important reasons to come to Salzburg in this specific month. April leads the way to spring.

Weather in Salzburg in April

"April, April - der macht was er will" is a popular German saying; it means: "April, April - does what he (months are masculine in German) wants". The saying refers to the unreliable weather forecasts for this month. Taking global warming into account, April has seen summer-like heat as well as snowfalls in previous years. The maximum daily average amounts to an impressive 14 degrees, whilst the minimum is at 4 degrees Celsius. There are four hours of sunshine per day on average, but also 12 days with rainfall during April.

Things to see & do in Salzburg: April

Depending on the year, Easter can be either in April or in March; we have covered Easter customs in the article for the previous month. 50 days after Easter, Pentecost is celebrated with a public holiday and various religious traditions.

An important cultural event at Pentecost is the "Salzburger Pfingstfestspiele" (Salzburg Pentecost Festival) that were founded by the famous conductor Herbert von Karajan. The Pfingstfestspiele focus on Baroque music, which matches perfectly with Salzburg; nevertheless, they are not as famous as "the" Salzburg Festival, despite of thousands of music lovers from all over the World travelling to Salzburg just for this occasion. A festival for people with a serious interest in music.

Things to do & see in the surroundings: April

The 23rd of April is Georgitag, St. George′s day. The patron saint of England is also the patron saint of horses and thus taken rather seriously in rural Austria. The so-called Georgi-Ritt ritual is a procession of horseback riders in historic costumes, usually to a church where they receive blessings for their horses and other livestock.