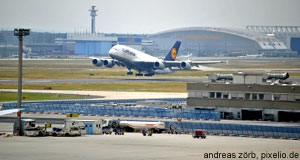 Salzburg Airport is called "International Mozart Airport Salzburg" (one of the very, very few and carefully chosen things in this city that were named after Mozart) and is a modern, medium-size airport that is very well-connected to the city centre. Note that Salzburg has a population of 150,000 and Salzburg Airport is directly on the outskirts of the city - this means that the historic centre is not that far away. There are several ways to get from the airport to the city.

Getting out of the airport main building, you will find a line of taxis waiting; in alternatively, there are parking lots for those that come or go by their own car. Car rental firms operate offices within the airport, there are several available.

Finally, the cheapest option, almost as convenient as a taxi: Go beyond the line of Taxis to the bus stop, get a ticket at the machine (you can also purchase tickets within the bus, but there they are a tad more expensive) and wait for one of the city busses. They run frequently and go directly to the main station, from where you can take another bus to the city centre. Going from Salzburg Airport to the station takes about 15 minutes.

Salzburg Airport is the second-biggest airport of Austria. Its busiest times of the year are the skiing season, which reaches its climax after Christmas. At this time of the year, it is charter flights and masses of people from all over Europe that drive Salzburg Airport to the limits of its capacity. The other "main season" is the summer, especially during the Salzburg Festival.

At this time, it is partly the high amounts of traffic that go through Salzburg Airport - but partly also the high number of smaller, private airplanes that land or take off from here. Rich people like to go to the opera via their own plane. "Ordinary" tourists will notice the skiing crowds much more directly than the private aircrafts.

Salzburg Airport was extended and modernised in 2003. The new terminal is open only during peak times of the year. In total, Salzburg Airport handles some 21,000 flights a year. For information on airlines, cheap tickets and flights in general, see our Salzburg flights article.

If you land at the airport, note also the fancy glass-hangar of Red Bull founder Didi Mateschitz. It contains the aircraft collection of the self-made millionaire and is open to the public. "Hangar-7" is also home to bars, high-end restaurants and other facilities; it often hosts art exhibitions of questionable quality.

On Flights to and from Salzburg

back to "general info"