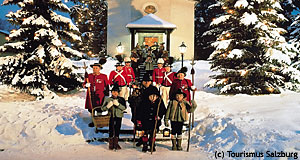 The story of "Silent Night, Holy Night", the World′s most popular Christmas Carol, is presented in the Museum and Chapel of Silent Night in the community of Oberndorf. The chapel is - kind of - the site of composition and first singing of Silent Night.

"Kind of", because it was actually the St. Nikolaus Kirche in which Joseph Mohr and Franz Xaver Gruber struggled with the broken organ on Christmas Eve. Mohr was a local priest and Gruber the village teacher, who also served the community as an organist.

Together they were challenged in 1818 with no functioning organ on Christmas eve, which is according to Gruber why Joseph Mohr came up with a poem named "Silent Night" that he had written two years before, presumably in the community of Mariapfarr in the South of Salzburg province.

Franz Xaver Gruber composed the tune and off they went with "Silent Night" for a tenor, a soprano and the choir. At least according to the legend - in fact, most details about the actual creation of the World′s most popular Christmas carol are rather unconfirmed rumours. The kind of thing people love and historians hate.

Silent Night, Holy Night all over the World

However, it is certain that the song by Gruber and Mohr was taken on by several local communities and for a while it seemed like the two creators would be forgotten within a few years. In 1819, the Tyrolian musician families Rainer and Strasser made Silent Night part of their repertoire and spread it in the Zillertal in Tyrol. With growing fame, they toured Europe and North America and thereby brought Silent Night to Leipzig in Germany in 1832 and to New York in the USA in 1839.

After that, Silent Night spread around the World: by 1866, the year it became part of the "Salzburger Kirchenliederbuch" ("Salzburg clerical song book") in its country of origin, it was already a crucial element of Christmas celebrations all over the World. Both catholic and protestant communities made "Silent Night, Holy Night" their favourite Christmas carol and today there are translations into about 300 different languages and dialects.

The original version is sometimes interpreted as a metaphor to the liberation of Salzburg from the Napoleonic occupation. In fact, Joseph Mohr was a politically and socially active person that became somewhat controversial later in his life for getting fiercely involved with support for the poor in rural Salzburg. Even today some Salzburgians regard his is being an early socialist, despite of being a catholic priest.

Silent Night is more popular today than ever before. However, for many people in Salzburg the carol has an almost "sacred" appeal, for them it is reserved for the night vigil on Christmas eve and they don′t even want to hear recordings of the song before then.

A Christmas Carol in 300 languages

At the end of the night vigil on Christmas Eve, most communities in Salzburg and the surrounding areas of Upper Austria, Bavaria and Tyrol turn down the light to only candle light in the churches, silence the organ and end the service by singing "Silent Night" in its original German version: "Stille Nacht, heilige Nacht".

In Oberndorf you can find the memorial chapel as well as a Gruber-Mohr memorial itself and an exhibition on the creation and spreading of Silent Night in the local museum. The chapel was opened in August 1937, although the construction started as early as 1924 in reaction to the 100-year-anniversery of the song. The pink building next to the chapel is the vicarage in which Joseph Mohr lived whilst serving in Oberndorf between 1817 and 1819.

The chapel was copied for the Germany-theme park "Frankenmuth" in Michigan (USA) in a 1:1 scale. In case you should make it to Oberndorf on Christmas Eve, try to be at the chapel at 5 pm. Then a memorial ceremony and service takes place that is ended with the singing of "Silent Night, Holy Night" in several languages.

http://www.stillenacht.info/
Information on Oberndorf, the carol and cult - opens in new window