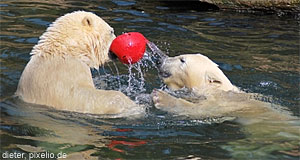 The Salzburg Zoo Hellbrunn is based on the menagerie of the Prince Archbishops of Salzburg, who lived the Baroque passion of keeping exotic animals. Hellbrunn - set by the Hellbrunn Castle - was also the site of enclosures for the famous Salzburg white deer that was bred here.

If you are generous enough to consider this menagerie a zoo in the modern sense - or at least its origin - then Salzburg Zoo is the oldest Zoo in the World. About 300 years old, which makes it even older than the Zoo of Vienna (about 250 years and a lot noisier about it).

Up to the 1980ies it was - as most traditional zoological gardens in Europe - in quite a bad state with enclosures too small, too many big animals and too little money. Since then, the Tiergarten Hellbrunn was modernised, extended and today one of Europe′s better zoological gardens. Although you shouldn′t expect the "World′s best zoo", Hellbrunn has a good blend of local Austrian animals, mostly form alpine regions, and more exotic creatures in now state-of-the-art cages and enclosures.

However, truly remarkable are in particular the old walls and enclosures that are of Baroque origin. The zoo follows the Hellbrunner Berg Mountain and uses its rock walls as natural borders. A member of the European Zoo Association, the Tiergarten Hellbrunn defines its goals in preservation, education and recreation. It is property of the Salzburg province.

By the way, just outside of the zoo you will find the "Steintheater" in the Hellbrunn Park. This is a theatre cut into the walls of the Hellbrunn Berg Mountain and another nice example for Baroque decadence. It was built in 1616 for Archbishop Markus Sittikus by transforming a stone quarry that occupied the site previously.

The Steintheater was the first open-air theatre North of the Alps and something fundamentally new to the Holy Roman Empire. It seated an audience of about 100 people under a rock arch and another 100 the top of it. The Steintheater of Hellbrunn was also the stage of the first opera performance North of the Alps: Here Monteverdi′s opera "L′Orfeo" was played in 1617 to an astonished Salzburg audience.