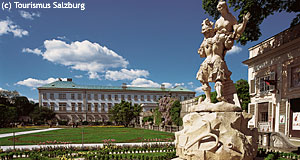 The Baroque masterpiece of Schloss Mirabell Palace was initially built as "Schloß Altenau" under the reign of Prince Archbishop Wolf Dietrich von Raitenau in 1606. It was a present for his concubine Salome Alt and most famous for its splendid gardens.

During the great fire of Salzburg in 1818, the Mirabell Palace was seriously damaged and re-built according to plans by Peter Nobile in the following years. The mighty tower in the heart of the eastern wing was destructed and the facades were re-decorated in Neo-classicist style.

The "Mirabellschwemme", a well for horses attached to the castle, was destructed in 1823. The Pegasus, unicorns and lions that are now in the Mirabell gardens were originally part of this Mirabellschwemme.

The Mirabell Palace is property of the City of Salzburg since 1866, and it is the office building for the city′s administration including the mayor of Salzburg and other offices since 1947, when the old Rathaus was give up.

The palace′s most impressive court is the one of the western wing with its richly decorated faēade. The ground floor is "rusticated", expressing a Baroque sense of pastoral tranquillity. Mirabell Palace′s central stairway is based on the stairway of the original Schloß Altenau of Prince Archbishop Wolf Dietrich von Raitenau. This limited the facilities and therefore, it does not meet the high-Baroque standards of most other parts of the building.

The stairway is called "Donnerstiege", meaning "staircase of thunder", but the name is actually referring to the artist who created the sculptures and statues, G. R. Donner, who built the decorations in 1726. A matching fresco on the ceiling was painted by B. Altomonte and G. Fanti in 1723, but destroyed in the fire of 1816.

The Donnerstiege stairway is a Baroque gem, with excessive amounts of marble, sculptures and other artwork that make it a unique piece in the rich heritage of Salzburg. However, it is not the only treasure hidden in the Mirabell Palace: the "Marmorsaal" or "marble hall" is another elaborate piece of Baroque craft in its most prominent expression.

Its ceiling once held a fresco by M. Rottmayer, but as with the one over the Donnerstiege stairway, it was destroyed in the fire of 1818. The rest of the rich decorations, such as marble masonry and statues, were mostly preserved. The rectangular hall extends over two storeys and is decorated with golden stucco works.

A fairy-tale Castle in the heart of Salzburg

Playful angel statues, marble pillars and excessive stucco work make the Marmorsaal hall a prime example for Salzburg′s Baroque. It is internationally known and famous as a venue for weddings and hosts concerts almost every evening, that are particularly popular with tourists. The played pieces are generally some decent Mozart - probably to meet touristy expectations; the quality is considered to be alright, so if you have an evening off without anything to do, check the concert guides for the Mirabell Palace.

In the southern part of the Mirabell Castle, you will find the castle′s chapel, the Schlosskirche Mirabell. It was re-modelled completely after the fire of 1818. It contains a central hall with a round apsis and a vaulted ceiling. The grisaille painting was done around 1830, only the altar dates back to 1722.

Flanking the altar, you will find Baroque statues of the Saints Augustinus, Rupert, Virgil and Martin. The chapel is used by a number of congregations today that don′t have own churches/temples/other kinds of community spaces for worship purposes. If you are member of some bizarre cult and in need for measures to support your spiritual welfare whilst in Salzburg, it might be worth checking out the program of the chapel.

Click here to find the Mirabell Palace on our Salzburg Map

http://www.stadt-salzburg.at/hochzeit/mirabell.htm
History (German) and photos of the castle - opens in new window