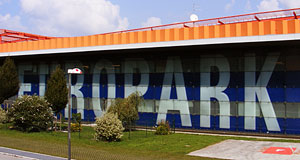 The building uses a lot of glass and open spaces. The surroundings of the building try to integrate the landscape and have recreational green areas to fake natural beauty to the shopping-mad crowds.

The Roman architect Massimiliano Fuksas was responsible for the design of the Europark. His design won a competition in 1994, the original Europark was opened in September 1997 and the building was extended in 2004 until autumn 2005.

Not only a shopping mall in the traditional sense, it also includes parks and recreational areas in the surroundings and aims to make "shopping" a well-rounded experience. It can be doubted whether that is achieved, after all the Europark is simply a shopping mall, but a piece of contemporary architecture of that size clearly is an achievement in a city like Salzburg.

In 2004, the then 80 stores of the Europark had a total revenue of 203,3 Million Euro. This makes 8800 Euro per year and squaremetre - the top result in all of Austria. The recent addition to the Europark contained the so-called "Oval", a section with a round stage and seats for 250 people. It aims to host cultural events such as concerts, cabaret or film festivals.

http://de.wikipedia.org/wiki/Europark
German wikiepdia on the Europark - opens in new window