home > sightseeing > main sights > must do 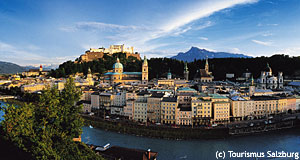 Salzburg chocolatier Paul Fürst invented the Mozartkugel ("Mozart ball") in 1890 and named it after his city′s most famous son. The pistachio, marzipan and nougat core is coated in milk chocolate and until today handmade in the Konditorei Fürst at Alter Markt square. Much cheaper and almost as tasty are numerous other brands of Mozartkugel, sold everywhere in Salzburg - if not Austria.

2.) Drink a litre of beer in the Müllner Bräu beer garden!

Monks brew beer in Austria for centuries and the editor′s choice for the best place to consume a traditional 1-litre-Stein of "Märzen" (lager), is under chestnut trees in the beer garden of the Bräustüberl in the city district of Mülln. Equally popular by students, locals and tourists, it is a lively place and wonderful to hang out on a warm summer evening.

3.) Go to a classic concert or the theatre!

There is music beyond the pricy Salzburg Festival in this city - just look for ticket offices or stop by the music university Mozarteum, where you can often get cheap tickets for "house productions". Very scenic, though a little touristy are classic concerts organised in the fortress or Mirabell castle.

If you are a student under 26, you are entitled to get cheap tickets at the Landestheater box office for all productions 30 minutes before the beginning of the play. For further enquires, see our Salzburg link directory, or ask at the tourist information. If you speak German, look out for the local newspaper "Salzburger Nachrichten" - they have a daily calendar with a concert and theatre guide.

4.) Meet locals & get a sense for the "Salzburg beyond Mozart"!

In the peak of the season, Salzburg is well-hidden under several layers of tourists - which is fair enough, eventually all of you come to enjoy a spectacular city. However, it can make things difficult if you want to get involved with local people. Good spots for doing so are "Café Shakespeare" at Mirabell square, the University canteens ("Mensa") or other University facilities.

There are several hills in Salzburg itself, you will get the best views from Mönchsberg and Festungsberg (though these are the most crowded ones) and Kapuzinerberg - the latter one is very suitable for a round starting at the Capuchin Monastery and leading you all across the hill to the southern end of it. For more demanding hikes, attack Gaisberg or Untersberg, both accessible with public busses. Salzburg is a hiking paradise!

6.) Read some literature in the old town!

Salzburg left an imprint on the world of literature - sit in a quiet corner that you like and read. The editor′s choice would be Stefan Zweig, a Jewish-Viennese intellectual who partly lived in Salzburg until 1938 and was part of the Vienna intelligenza. He wrote excellent novellas that often reflect his interest in the human nature and psychoanalysis.

Georg Trakl was a drug-addicted, self-destructive expressionist who wrote shockingly modern poetry often dealing with Salzburg until he committed suicide in 1914.

Thomas Bernhard (1931-1989) was raised in the Lake District north of Salzburg and started his career in this city. His play "Die Berühmten" deals with Salzburg′s festival-society and gives some insights to the poshest side of the city.

As much as Bernhard, Peter Handke, who lived in Salzburg between 1979 and 1988, has a somewhat disturbed relationship to Austria. "Wunschloses Unglück" tells the story of his mother and is one of his more readable works.

The novel "Silentium" by Wolf Haas is a criminal story set in contemporary Salzburg, very entertaining and a work of an Austrian shooting-star in criminal novels.

7.) Listen to the Glockenspiel on Residenz Square!

One of only three proper Glockenspiels (an instrument composed of several bells) is part of the New Residenz in Salzburg. It was installed in 1704 under Prince Archbishop Johan Ernst Graf Thun and contains of 35 bells, playing 40 different tunes. Stand on Residenz square to hear it play - daily at 11 am and 6 pm.

Today, Salzburg is bursting with splendour - but only 60 years ago, up to 70 000 Austrians were killed for being or being classified Jewish by Nazi authorities - as well as ten thousands of conservative, socialist, homosexual Austrians - and dozens of other groups of persecuted people. Some 100 000 Austrians had to flee the country. Among high Nazi criminals were many Austrians, too, with Hitler himself being born in the nearby town of Braunau.

At some point when you are in Salzburg, stop by and think of what and who Nazis were. Not just the bad guys from "The Sound of Music", for sure. Take this part of Salzburg′s history as a testimony of what human beings are capable of doing to other human beings. Remember it. And be different.

Salzburg has a number of markets, most of them blending souvenirs with agricultural products normally made in the region. Grünmarkt in front of the Kollegienkirche is one of them, held Monday to Saturday from 7 am to 7 pm (5 pm on Saturdays). Find sweets, cheeses, breads and pastries, vegetables - and of course Mozartballs. An alternative is the Schrannenmarkt, held on the Mirabell Square every Thursday from 5 am to 1 pm. The items are similar, maybe a bit less aiming to meet touristy needs and more towards locals.

10.) Embarrass yourself with a "Sound of Music" sing along!

"Do Re Mi", "Edelweiss" or "My favourite things" - don′t worry to sing out loudly in Salzburg, most Austrians have never seen the movie and will probably not recognise the tunes either. So off we go to the hills and get them alive with the sound of music!

The editor′s choice would be either the cathedral square or the main top of the main tower in the fortress. The Hellbrunner Allee would be another site from the movie.

Tourist Traps: Things NOT to do in Salzburg